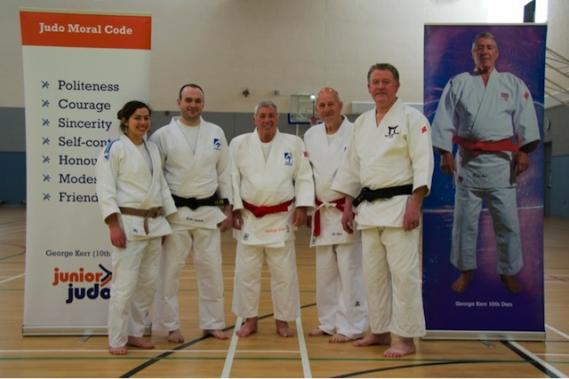 Club President and Judo legend George Kerr visited our clubs in Aberdeen to give our members a masterclass and share some of his experiences from various Olympic Games.

The International School of Aberdeen was the setting for Ultimate Judo's Masterclass with Club President George Kerr. George shared some of his experiences gained through a life of judo at the highest level. He shared his opinions on which techniques are most effective in todays judo and told stories of his times in the Olympic Games as double Olympic winning Coach, Chairman, President and Referee. The day was well attended by both players and parents who all sat in amazement as George showed us why he is known throughout the world as "Mr Judo".

George was joined on the mat by Bill Berry MBE who has just been put forward for his 8th Dan. Bill from Aberdeen is chairman for Aberdeen Sports Council and Local Hall of Fame member. Hamish Mitchell also made the journey up from Edinburgh to help. Hamish is a former coach at the famous Edinburgh Club.

If you would like to buy the same gi as our coaches, they are available at www.kicksport.com