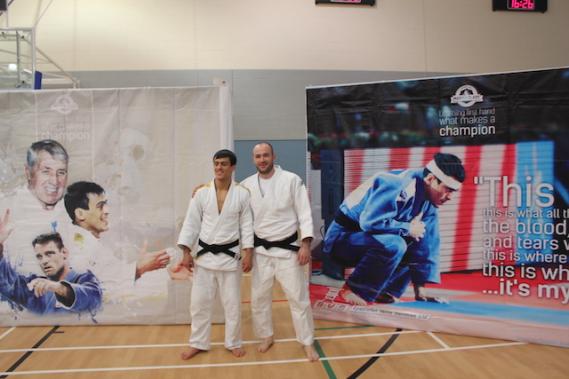 In 2014 we had the honour of hosting a masterclass with Judo legend Georgii Zantaraia. Born in Georgia, his family fled the war between Georgians and Abkhazians when he was 4 years old, taking up residence in Ukraine. He proudly competed under the Ukrainian flag winning World and European titles as well as becoming Ukrainian Olympian.

Georgii took time out of his Olympic qualifying schedule to visit Scotland for a weekend to share his unique style of Judo. On the mat, he took time to randori (spar) with every child (50 plus of them) and spent a day breaking down his techniques and ideas behind his Judo for our senior members. Georgii showed why he is a legend of the sport and sporting icon with his approachable and relaxed demeanour.

On retiring from international Judo he set up the Georgii Zantaraia Judo School where he continues to inspire the next generation. He also engaged in politics standing as candidate for the Servant of the People party in Kyiv city council elections.

Like so many Ukrainians, Georgii sees all that he loves being challenged and threatened. Rather than taking up the countless invitations for safety abroad, Georgii has opted to stay in Kyiv. “I already left Abkhazia once and now I will not go anywhere and I will not give up anything". Once again, his Olympian mentality shines through. He told me last week that things were changing daily in Kyiv and his fighting spirit and defiance was evident:

"I'm in Kiev and I'm staying until the end."

To me and the club, he is not just a friend, sporting icon and legend. Georgii is a hero and we wish him, his family and countrymen our best wishes during this horrendously traumatic time.

Hopefully, we can all enjoy Judo together again in the coming years.