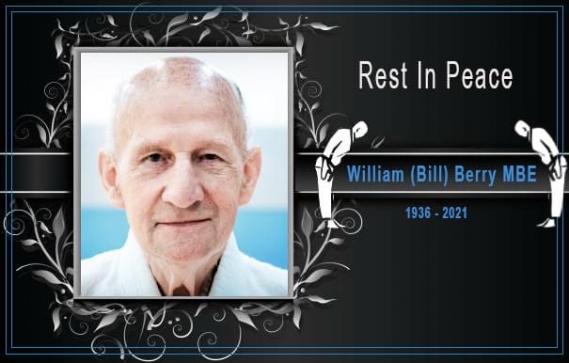 It is with great sadness and a heavy heart that I inform our judo family of the death of Bill Berry MBE, 7th Dan. Bill passed away peacefully surrounded by his immediate family on Monday 15th February aged 85.

Bill was instrumental in supporting Ultimate Judo opening in Aberdeen in 2010. He opened doors and often walked through them with me as I got started. He was not only a mentor and someone who supported the club but he was a great friend and confidante. I am grateful to him for the opportunity to serve under his chairmanship of the Aberdeen Sports Council in recent years.
He would give advice and a scolding in equal measure but it was always delivered with his trademark dry sense of humour. No matter where I went with Bill, whether it was for a meal or a coffee, everybody knew him. He was one of Aberdeen’s well-kent faces.
Bill was an accomplished judoka and coach, a 7th Dan with over 65 years service. As a player he was British and Scottish Police Champion on several occasions, a record only recently beaten by one of his own players Jason Moore. He was Chairman and Honorary Vice-President of JudoScotland and was the longest serving representative on the BJA Council. He was also a Senior Examiner and National ‘A’ referee. Additionally he was part of the 2014 Glasgow Commonwealth Games Baton Relay as well as being made a Free Burgess of the City of Aberdeen. Not content with all of that, Bill was an inaugural member of the Aberdeen Sporting Hall of Fame which is on display at Aberdeen Sports Village before being given a richly deserved “Lifetime Achievement” by Clubsport Aberdeen in 2016.
He was known as the gentleman of judo and he will be sadly missed at competitions across the country as well as matside at clubs across the region. He was known to pop into some club sessions over the years and was a great supporter not just of Ultimate Judo but of all the North East clubs.
I would like to send my sincere condolences and those of Ultimate Judo to Bill’s family at this sad time.
Rest well Bill.