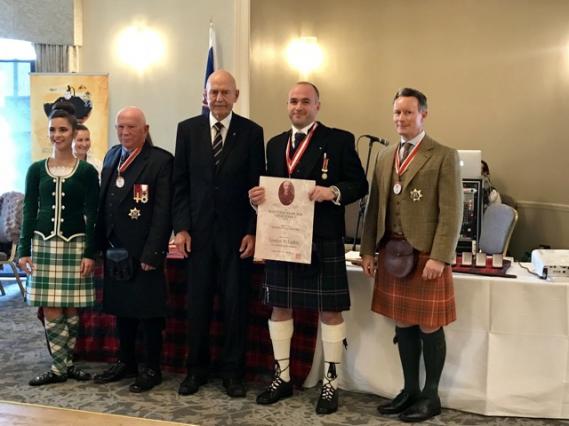 Head coach Gordon MCCathie has received another honour, this time from the Scottish Samurai Awarding Body. Gordon becomes only the second judoka (Bill Berry MBE being the other) to receive an award setup by Ronnie Watt 9th Dan karate.

The Scottish Samurai Award awarded to those who have:
— Given distinguished service in any area of activity, whether it is locally, nationally or internationally.
— The recipient will have played a conspicuous role in their field, making a distinguished contribution to their area of expertise, where their work far exceeds what would normally be expected, and whose commitment and dedication are rarely seen.

Gordon received his for services to Judo.

This award puts Gordon in good company with past recipients of awards including Sir Ian Wood, Billy Connolly, Susannah Lumley and Alex Salmond to name a few.

Gordon was also asked to give a demonstration at the award ceremony After being presented his award from Lord Bruce and Ronnie Watt.

For more information on the prestigious awards please Check out their website.