Information and report on the Jeon Ki Young seminars in Scotland 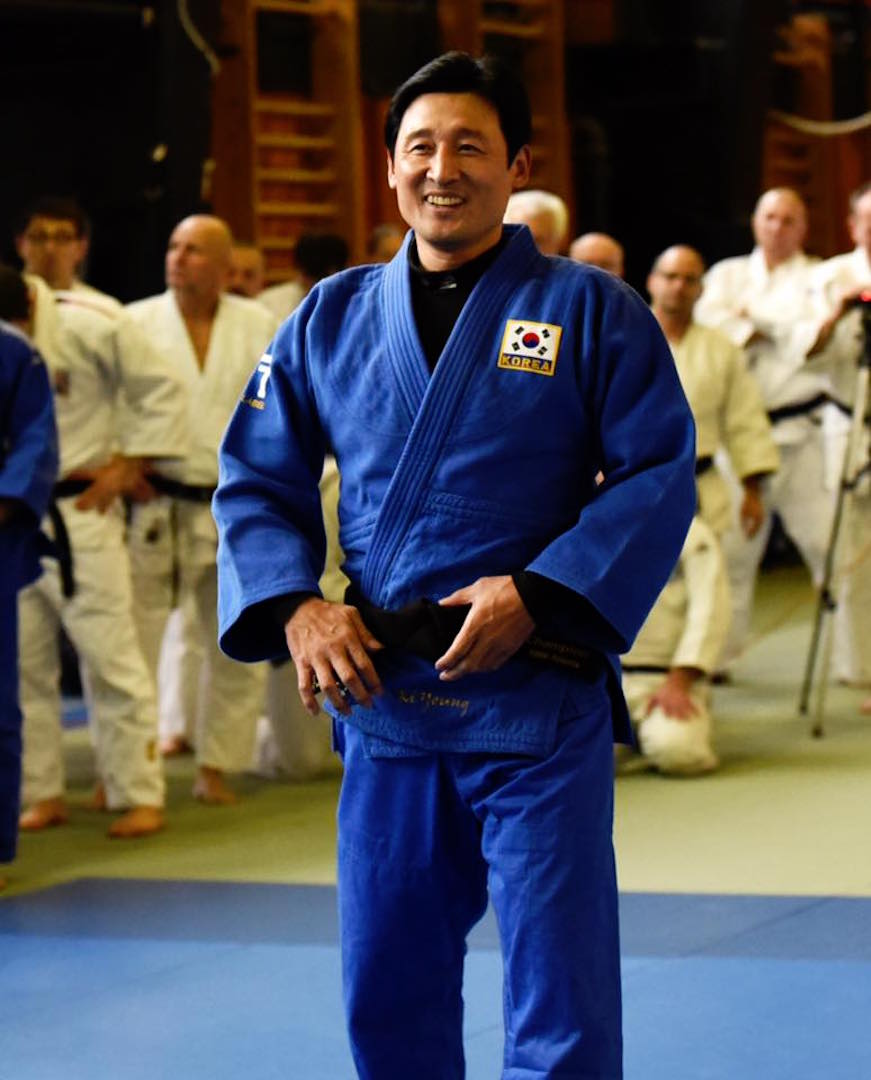 When I discovered that Gordon McCathie’s Ultimate judo had organised and arranged a seminar with the great Korean judo champion and teacher, Jeon Ki Young, supported by Fighting Films, I thought to myself ‘This is too good an opportunity to miss.’ How right I was!

Jeon was considered to be practically unbeatable throughout the mid to late 1990s initially fighting at under 78 kg then moving up to under 86 kg. Triple world champion, in 1993, 1995 and 1997, six World Cup titles and Olympic gold medalist in Atlanta in 1996, his strategy and techniques baffled even the best of his contemporaries. European, World and Olympic champions fell before him: Yoshida of Japan, Huizinga of the Netherlands, Gill of Canada, Morris of the USA and Spitka of Germany were among the great fighters he defeated on his path to glory. He always seemed to be at least three steps ahead of his competitors, who no doubt breathed a collective sigh of relief when he retired at the young age of 25.

When such a dominant champion emerges it is all too easy to assume that it is because of some God-given gift, some innate superior athleticism, speed or strength, but Jeon brought a different kind of intelligence to judo, a different understanding of strategic gripping, timing and technique. The Korean judo system is renowned for producing tough competitive fighters, but Jeon, was almost untouchable, something special, retiring undefeated in World Championships and Olympic judo. Before going to Scotland to the Edinburgh International Climbing Area in Ratho, a superb facility where Scotland’s national dojo is located, I had studied his judo on the Fighting Films dvd, frequently comparing his judo with that of another great champion, the Japanese Toshihiko Koga and tried to imagine what the outcome of a bout between those two would have been. It is the dream contest that never happened. Who would have won? Who can say? I would not have bet against Jeon though. After retiring from competition he completed his doctorate and became a professor of Judo at Yong-in University and since retiring from competition he has been instrumental in keeping Korean judo at the forefront on the world stage, helping to train the national team, and many of his students have become champions in their own right. His judo is characterised by its originality and adaptability and subtle differences in approach that combine seamlessly with the Spartan training prevalent in Korea to produce fighters who are always extremely hard to beat.

Judo effectiveness begins with the grip. His kumikata, or gripping skills, are so well developed, so complete that he always has the advantage. As a competitor he developed his own system for dealing with left and right handed fighters and was always able to take the initiative whatever situation presented itself. In the seminar he held nothing back and went into great detail to explain how to control the grips in a wide range of competitive situations. He considered options and strategies for ai-otsu, the orthodox right against right situation and the kenka-yotsu, right against left stance where the mechanics and leverage change dramatically. An admirer of the classical Japanese style and approach, he explained the traditional methods of doing judo then described how he was forced to develop his own approach to make his techniques more effective against the very highest calibre of opponents. The way he used his whole body movement to break his opponent’s grip was particularly impressive, as was the way the gripping strategy paved the way for the throwing techniques to be successful.

The first day saw Jeon explaining his favourite shoulder throws, morote seoinage and ippon seoinage, to a group of about fifty fascinated and eager to learn judoka. As you might expect his method of instruction was superb, pitched perfectly to the level of the players who were participating. Sharp, crisp performances of the throws were broken down and carefully analysed, then their development as solutions to particular problems encountered in the contest situation was explained analytically, but with modesty and a great relaxed sense of humour. Jeon explained how he modified his grip as well as his footwork at a basic level, which results in him doing something similar, but different to what most judoka try to do. As well as explaining his own favourite techniques he taught three varieties of the reverse shoulder throw, the gyaku seoinage, a technique that has become the trademark throw of many top Korean fighters.

Jeon’s basic left morote seoi-nage is an explosive throw that is difficult to read, predict, counter or stop in its own right. He showed it standing, off one knee and off both knees. He also explained how he combined it with right ippon seoinage, a powerful double threat. He then went on to explain, very logically, how one of his students developed the reverse seoinage, beginning with the simplest version first. All three variants of the reverse seoinage are related, but different enough in execution to feel like different techniques and possibly found their inspiration in Korean aikido. As these techniques were added into the mix it became apparent how well thought out and how complete this approach is, offering a solution to every problem, a way to penetrate any defence.

In the afternoon he went on to explain the advantages of the double sleeve grip he used to great effect, explaining how he gripped both sleeves but did not do the classical sode-tsuri-komi-goshi, but rather different forms of seoinage, clarifying how to combine these with a devastating osotogari, the combination he used to throw the defending world champion Hideoshi Yoshida in 1995, in the final of the world championships in Makuhari, Chiba, Japan.

It is a testament to the effectiveness of his teaching methods that many of the participants on the course were soon performing convincing versions of all of the techniques he taught, with some of the younger players in particular doing blisteringly fast and acrobatic reverse seoinages before the end of the day.

Sunday saw a slightly changed group studying the Korean master’s tai-otoshi and uchimata which he explained was actually closer to hanegoshi than the classical uchimata, whatever, its effectiveness was palpable and I for one could not help feeling sorry for Gordon McCathie, the perfect uke, as he bounced off the mat again and again, even though Jeon was clearly toning down the speed and power of his throws.Twenty years after his prime Jeon is still a formidably powerful athlete. Over the two day course he skilfully interweaved warm-ups and cool-downs, stretching and agility drills, approaches to skill development through uchikomi and nagekomi, chats about strategy and tactics, gripping drills, perfectly placed short randori sessions and even included some very useful newaza drills and transitions. All in all it was a perfect weekend of collaborative judo, delivered by a world class performer and teacher to a mixed group of friendly, cooperative, appreciative judoka from all over Scotland, northern Ireland and England. Everyone on the course, from the ages of 16 to 60 plus, who had come from as far afield as London and Aberdeen, will have taken something away something of benefit from it. They certainly made their appreciation felt with their applause at the end of the course after the final question and answer session.All in all, a fantastic week end of judo. A big thank you to Jeon Ki-Young and his lovely wife for all their efforts and congratulations and thank you to Ultimate Judo and Fighting Films for bringing a really inspirational judo superstar to these shores to share his knowledge and expertise with us for a while. Hopefully, it will not be too long before we see him here again!