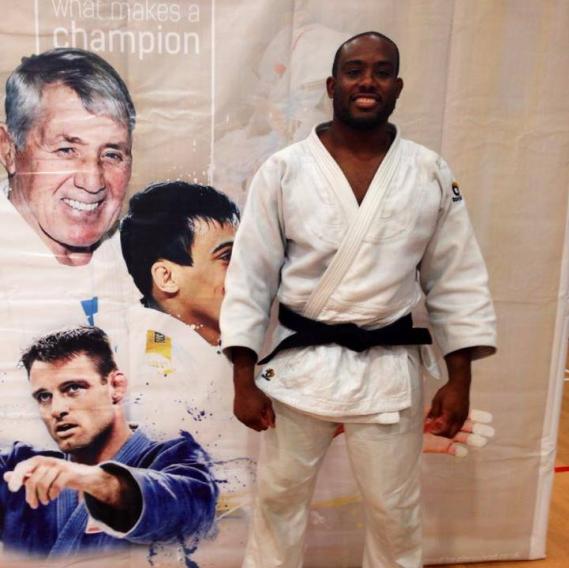 Here is a short profile of Club member Christopher George who will be competing in Glasgow Commonwealth games for Trinidad and Tobago.

Christopher is a Trinidad and Tobago athlete who recently embarked on his Judo journey in 2012. After spending 12 years on the Senior and Junior National team for Trinidad and Tobago as a water polo player, decided to embark on a new challenge, one that would fulfill his dream to compete at the highest level - the Olympics.

Judo has always interested him competing in tournaments as early as 2009, but formal tutelage started in June of 2012 at the Queens Park Judo Club in Trinidad and Tobago. He has many years of experience in Martial Arts, having the rank of Nidan in Shotokan Karate, and a blue belt in Brazilian Jiu Jutsu, but Judo has now captured his passion. Christopher feels that Judo is a perfect combination of tradition and competition.

In 2013 Christopher moved to Scotland as a 3rd Kyu (green belt), and his knowledge was accelerated by meeting Jason Moore of Aberdeen Judo Club, and Gordon Mccathie of Ultimate Judo. Both coaches with their immense experience pushed Christopher to not only to be a strength and reactive player, but one who had the technique to throw effectively and use his physical skills to be a more complete Judo player. Christopher under their direction gained his black belt in May of 2014 by “line up”.

Christopher is now on his journey to the Commonwealth Games in Glasgow 2014, and CAC in Mexico 2014. Each tournament is a stepping-stone in his quest to be the best Judoaka he can be.

Ultimate Judo and Aberdeen Judo Club wish Chris all the best for the Commonwealth Games in Glasgow.